Kerala: The curse of the rain gods 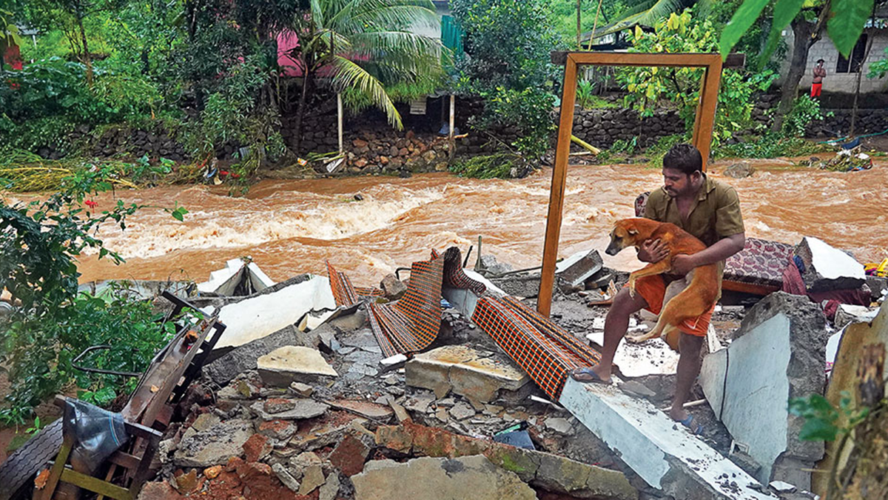 Kerala is yet again reeling under a deluge with the retreat of the southwest monsoon coinciding with the arrival of its northeast cousin for the third time since 2019. Heavy rains triggered massive landslides, this time in the hilly terrain of central Kerala districts Kottayam, Idukki and Pathanamthitta.

The state has received 117 per cent excess rainfall in October, triggering floods in Ernakulam, Alappuzha and Thrissur districts (again in central Kerala). This is the fourth year in a row the rains have played havoc in the state since the 2018 once-in-a-century mega floods.

The recurring floods and drastic changes in weather patterns have alarmed climate experts. "Kerala has seen rapid climatic changes in the past decade. There is a visible change in the rainfall pattern during the monsoon as the Arabian Sea is regularly recording temperatures of 28 degree Celsius in the monsoon season (the normal used to hover below 27 degree Celsius). The shift in the sea temperature is a clear indication of the effects of global warming. It demands much greater vigil for Kerala," says Dr M.G. Manoj, a senior scientist with the Advanced Centre for Atmospheric Radar Research at the Cochin University of Science and Technology (Cusat).

Manoj, who has been studying climatic changes on India's southern coast for many years now, says Kerala's geographical position and topography has exacerbated matters. So, rising sea temperatures result in deep cloud formation and the proximity to hills in the Western Ghats trigger mini cloudbursts. "The disaster hit zones received 50-70 mm of rainfall in an hour, resulting in flashfloods and landslides. This is a new phenomenon-the Indian Meteorological Department (IMD) is yet to classify mini cloudbursts on its weather charts. During the monsoon season, several pockets are receiving more than 20 mm of rainfall per hour for short spells. This situation increases the intensity of disasters, considering Kerala's unique topography with its 50-100 km width in many areas, hills and 44 rivers. The phenomenon has to be studied to perfect warning alerts," adds Manoj.

Kerala receives an average 3,000 mm of rain a year in three portions-pre-monsoon (April-May), Southwest monsoon (June-September) and Northeast monsoon (October-December). Over the years, the rains have helped it become 'God's own country' and also produce cheap hydroelectric power.

But the climate calendar has changed since 2017, the first indications of which was Cyclone Ockhi, which hit the southern coast that year killing 143 fishermen in the state. Around 29 cyclonic storms have hit India since 2017, and 11 of them originated in the Arabian Sea. In fact, Kerala was saved this May when Cyclone Tauktae barely missed its coast and moved to Gujarat. "It would have devastated Kerala if it had moved 50 km closer to our coast," reveals a senior weather scientist.

The State Disaster Management Authority's studies have red-flagged 5642.6 sq. km of land (14.5 per cent of the total area) in the state, saying they are prone to floods. The population in 27 taluks are highly vulnerable while another 45 taluks are at moderate risk.

The climate calendar has changed since 2017, the first indications of which was Cyclone Ockhi, which hit the southern coast that year killing 143 fishermen in the state.

"We need to learn to live with floods as the global warming effects will be severe. This is a challenging phase for Kerala, and there are no easy solutions. We will have to manage the floods with a scientific approach while micro-planning to strengthen our vulnerable river basins," says James Wilson, a civil engineer-turned-hydrologist currently working with the Mullaperiyar Dam Dispute Cell.

According to him, it's not practical for Kerala to create 'flood storage cushions' anymore. "The 53 dams operated by the state have a combined storage capacity of 5,806 million cubic metres (MCM). Kerala has no other option other than releasing the water during heavy flooding," argues Wilson. This is a far cry from even five years ago, when TV newsroom discussions were invariably about fears of drought and power cuts in the summer months (January-May) and governments were accused of "wasting" the dam water.

The effects of rapid climatic change have been made worse by the encroachments on riverbanks, unrestricted quarry mining, a high population density (859 people per sq. km) and the disappearing wetlands. The state government, in an affidavit filed in the Supreme Court in October 2020, revealed 27,735 cases of Coastal Regulation Zone (CRZ) violations. It listed 1,860 structures built without clearance from local bodies, but prayed for exemption from punitive action.

Conservationists blame the political leadership for the present mess. "We are paying a high price for our greed and corruption, for it has transformed Kerala into a disaster-prone zone in recent years," said retired professor and environmentalist E. Kunjikrishnan after a visit to Kootikal in Kottayam district, which saw massive landslides after the recent flash floods. "We have destroyed the Western Ghats with unrestricted stone quarry mining. Around 6,500 stone quarries are operating in the region, but only 750 have licences to operate. Meanwhile, encroachments along the river basins constrict the flow of water and 'water bombs' keep exploding in the wet season, resulting in landslides and flash floods."

K.P. Jebi, a native of Mundakayam in Kottayam district, learnt this the hard way after he lost his house on the banks of the Manimalayar river. A bus driver who had used all his savings to build a decent home for his family, he lost everything in seconds when the gushing water swept away his house. "Thank God, we are alive. We moved when it started raining heavily and realised the river was in spate. We have lost everything," says a grief-stricken Jebi.

Retired senior bureaucrat and former advisor to ex-prime minister Manmohan Singh, T.K.A. Nair, says Kerala must design foolproof strategies to deal with the climate change challenges facing the state. "There are enough warnings. Whether we listen to them is another matter. Every project in Kerala, whether it's government or private, must have an ecological impact study to minimise future casualties," Nair points out.

But the state government is still dilly-dallying over restrictions in the flood-prone zones and relocating vulnerable families from disaster-prone areas. For the time being, relief operations are under way for the October victims. State revenue minister K. Rajan says the Left Front government is "conscious of the gravity of the situation and will introduce micro planning in disaster-prone areas. But our first priority now is to develop early warning systems locally to prevent any catastrophic effects".

Any further delays in executing an integrated plan for disaster-prone areas may prove calamitous for the state. Kerala is just limping back to normal after a long, bruising battle with Covid and its people can do with a responsive administration that heeds the warnings of these extreme climate events.