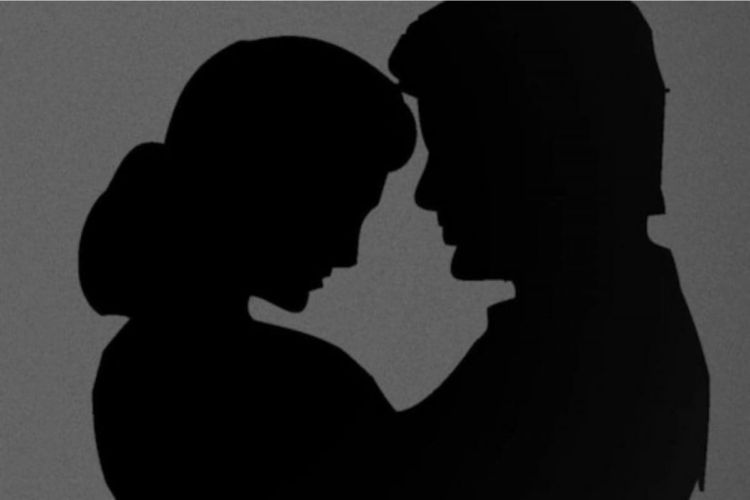 Even as the nation was facing a pandemic, the year saw a 10% rise in suicides in India. Daily wage earners, the self-employed and housewives had the highest numbers among those who took their own lives and Delhi saw a massive 24% jump in suicides, top among 53 megacities. 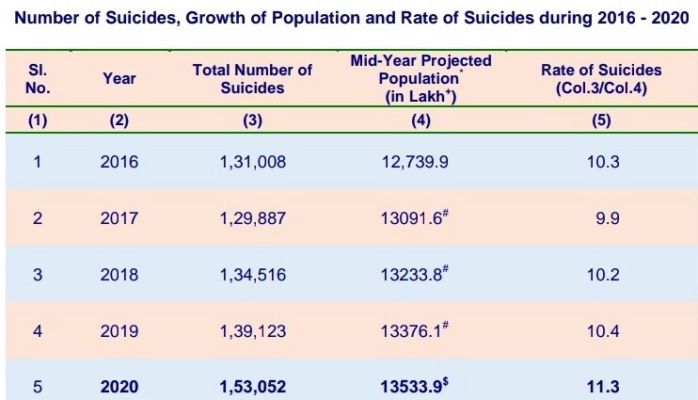 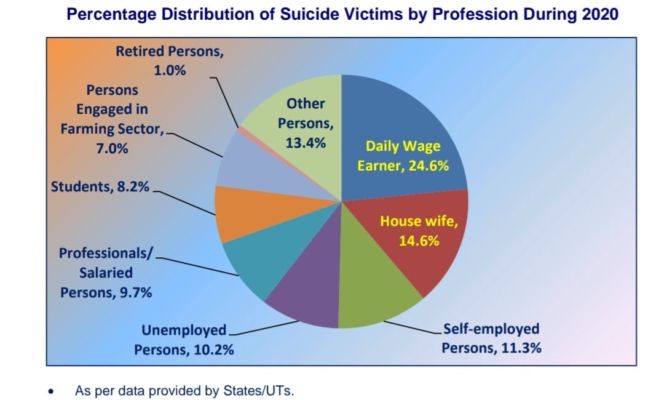 The report says that daily wage earners, followed by self-employed persons in male suicides, and housewives in female suicides contributed the highest numbers among those who ended their lives in the year 2020. 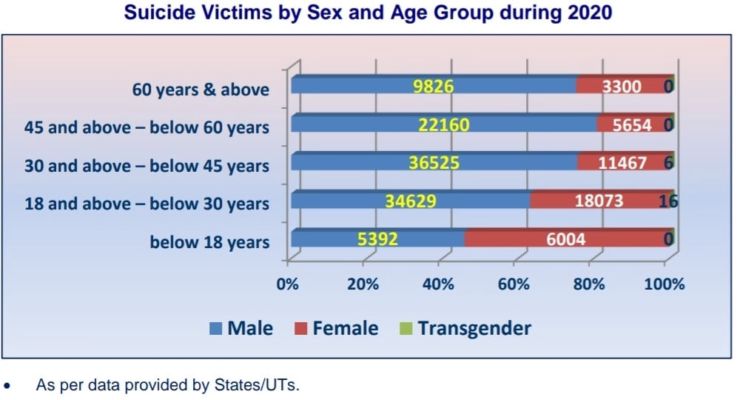 A total of 22 transgender persons too took their own lives, the report shows. Of these, 5 were 'unemployed persons', 9 were 'daily wage earners', 2 each were 'self-employed persons' and 'housewives', while 4 fall under the ‘other' category, it says.

Out of the megacities, the national capital saw the highest suicides, with over a 24% rise in 2020 compared to 2019, followed by Chennai, Bengaluru and Mumbai.

One Last Prayer to Hanuman: Ramrao, Farmer Trapped by Debt and Despair, Takes the Plunge

The report says that a total of 10,677 persons involved in the farming sector (consisting of 5,579 farmers/cultivators and 5,098 agricultural labourers) ended their lives in 2020, accounting for 7.0% of total suicide deaths (1,53,052) in the country. Out of 5,579 farmer/cultivator suicides, a total of 5,335 were male and 244 were female. States and union territories, namely, West Bengal, Bihar, Nagaland, Tripura Uttarakhand, Chandigarh, Delhi, Ladakh, Lakshadweep and Puducherry reported zero suicides of farmers/cultivators as well as agricultural labourers.

A total of 121 cases of mass/family suicides were registered during the year 2020. In these, a total of 272 persons, comprising 148 married persons and 124 unmarried persons, lost their lives. The maximum cases of mass/family suicides were reported in Tamil Nadu (22 cases) followed by Andhra Pradesh (19 cases), Madhya Pradesh (18 cases), Rajasthan (15 cases) and Assam (10 cases) during 2020 with a total of 45 persons in Tamil Nadu, 46 persons in Andhra Pradesh, 39 persons in Madhya Pradesh, 36 persons in Rajasthan and 10 persons in Assam losing lives.