Rajkummar Rao and Kriti Sanon answered this question to win Rs 25 lakh on KBC 13. Can you? 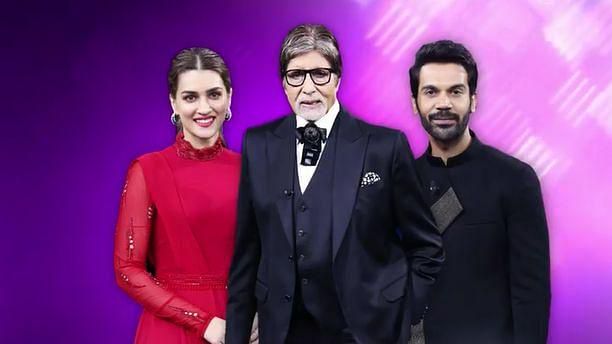 Amitabh Bachchan welcomed Kriti Sanon and Rajkummar Rao in today's, October 29, Shandaar Shukravar episode of Kaun Banega Crorepati 13. The KBC host was seen having fun with the two actors, who had come on the show to promote their film, Hum Do Hamare Do.

Rajkummar Rao and Kriti Sanon managed to win Rs 25 lakh on KBC 13. The question that made them win the amount was:

Which Naga martial art is characterized by kicking and blocking by the soles of the feet?

The options for the 13th question worth Rs 25,00,000 were Pari Khanda, Aki Kiti, Sqay, Velankanni. The correct answer was Aki Kiti. The actors used the lifeline Ask The Expert to answer the question.

OTHER QUESTIONS FACED BY RAJKUMMAR RAO AND KRITI SANON

Which planter are Homo Sapiens native to?

The options for the 3rd question were Mars, Venus, Saturn, Earth. The correct answer was Earth

Which of these is the name of an island visited by Gulliver during his travels on Gulliver's travels?

The options for the 4th question were Lilliput, Narnia, Neverland, Dinotopia. The correct answer was Lilliput.

Which building in New York City collapsed in the 9/11 terrorist attacks in 2001?

Which of the following is not among the four majors in tennis Grand Slams?

The options for the 7th question worth Rs 40,000 were Australian Open, European Open, French Open and US Open. The correct answer was European Open.

This church holds the mortal remains of which saint and one of the founders of the Society of Jesus?

Seychelles is a tiny island nation located in which ocean?

In September 2021, which of these politicians from Haryana passed his class 10 at the age of 86, by scoring 88 per cent in his English supplementary paper?

Which of these is fashion brand owned by Rihanna?

The options for the 11th question worth Rs 6,40,000 were Goop, Draper James, Fenty Beauty and Fabletics. The correct answer was Fenty Beauty.

Which radio station does she get a job in?

The options for the 12th question worth Rs 12,50,000 were Radio Chaska, Radio Maska, Radio Wow, Radio Rangeela. The correct answer was Radio Wow.

Amitabh Bachchan will introduce a new set of contestants next week.

I KBC 13's Kumar Saurav failed to answer this Rs 50 lakh question. Can you?

KBC 13 Episode 41 Written Update: Big B reveals why his dad used Bachchan as their surname