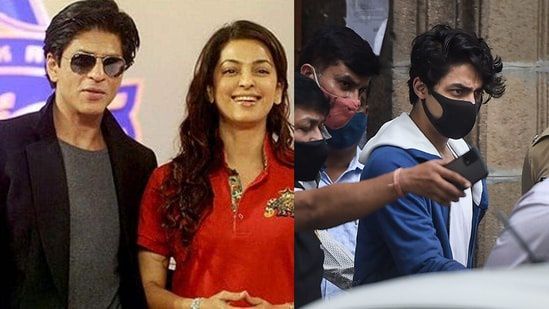 The actor, speaking to the media in Mumbai, said that the Bombay High Court verdict comes as a 'huge relief.'

'I'm just happy that it's all over and Aryan Khan will come home very soon. I think it's a big relief for everybody,' she said, as reported by ANI. 'Ab baccha ghar aa jayega (Our child will come home now),' she added.

The actor was at the Special NDPS (Narcotic Drugs and Psychotropic Substances) court on Friday to sign a ₹1 lakh bond for Aryan after the bail conditions were explained by the Bombay High Court. Juhi was the surety for Aryan. The 23-year-old's lawyer Satish Maneshinde said, "She (Juhi Chawla) knows him from birth as they are professionally associated."

'Bail formalities are completed. Surety of Juhi Chawla has been accepted. We are moving ahead. You will soon see Aryan out. Juhi Chawla knows him since birth. Juhi Chawla is signing the bail bonds," Maneshinde added.

Aryan was arrested earlier this month after a raid at an alleged rave party on a cruise. The 23-year-old was arrested with seven others on October 3 and was lodged in the Arthur Road Jail on October 8. After his bail plea was rejected by the Special NDPS court a few times, Aryan's legal team moved to Bombay High Court and his bail plea was granted. Following his bail verdict, pictures of Shah Rukh posing with his manager and legal team surfaced online.

Aryan was expected to be released from jail on Friday. Ahead of his return, his house in Mumbai - Mannat - has been decked up with lights. Fans are also parked outside the residence with banners and crackers.

The actor's son was in the US for two years where he was pursuing his higher studies. Earlier this year, he graduated from the University of South California's School of Cinematic Arts (batch of 2020).