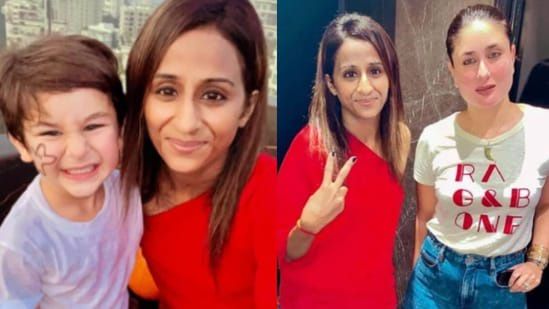 The four-year-old attended a terrace party specially organised for him and his friends.

In the glimpses shared on Instagram, Taimur posed with his friends and one of the organisers. He had an outline of an animated ghost painted on his cheek. It seemed like he had dressed as a cowboy, wearing a white T-shirt and a pair of denim pants with light brown cowboy boots. He also had a red scarf wrapped around his neck.

Taimur was joined by Tusshar Kapoor and Ekta Kapoor's sons Laksshya and Ravi. Laksshya opted for an all-black outfit whereas Ravie channeled Batman. As part of the party, the children dances and participated in a number of games. They were also served treats as well. Another picture, which also seems from the party, shows Kareena and Taimur posing with the organiser.

Kareena and Tim attended a halloween party a few days ago!  pic.twitter.com/4obgaGW1Xd

The party took place a few days before Taimur and Kareena, along with Saif and the couple's younger son Jeh left for Rajasthan for a vacation. The family seems to be vacationing in Jaisalmer. Kareena had shared a post-workout picture from the holiday earlier this week as well.

Kareena and Saif's pictures with a few fans there have surfaced online. One social media user, identified as Vinita Chaitanya, also praised Kareena for her humble nature. 'There something about @kareenakapoorkhan . we met (for the first time) last evening over a glass of red .. and what charmed me was her honesty..there was such an easy conversation about interiors, travel, kids and wine . but I do love that the stars of today are so real . #respect,' she wrote, sharing a picture with Kareena.

Kareena Kapoor says she rejected Saif Ali Khan's idea to allow Taimur stay up beyond his bedtime: 'I get annoyed'

Before their trip to Jaisalmer, Kareena and Saif had taken a trip to the Maldives twice. During their first trip, they celebrated Saif's birthday. They visited the exotic island again for Kareena's birthday.