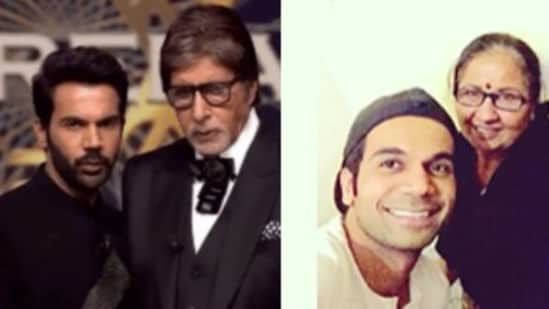 Amitabh Bachchan will be hosting Kriti Sanon and Rajkummar Rao in the upcoming episode of Kaun Banega Crorepati 13. The duo will be seen promoting their new movie Hum Do Humare Do.

In a new promo from the episode, Rajkummar remembered his mother and revealed Amitabh had sent a video message for her after she died.

In the video, Rajkummar said, 'My mother was your big fan. She loved you a lot. She told me that when she got married in Gurgaon, she only brought one thing with her, that was your poster and she pasted it in my father's bedroom. So my father felt so insecure, he was like, it is an arranged marriage and she has brought a poster of Amitabh with her. My father was so insecure that he asked her if she was with him or with Amitabh.'

He added: 'When I was shooting for Newton, I got the news that she is no more. She was never able to come to Mumbai but she used to say that I want to meet you (Amitabh) once. So when she died, I felt really guilty that I wasn't able to get her to meet you. That very night when (she died), I contacted you and told you about it. I asked you if it was possible for you to make a short video for her and I will not show it to anyone else and I'll just play the video in front of her photo because she just wanted to meet you once. And sir, you instantly made a video for her and I played it in front of her photo and for some reason sir the video disappeared from the pen drive on its own. Nobody knows where the video is. I think it was meant to be between you and her and thank you so much for doing this."

Rajkummar's mother, Kamlesh Yadav died in 2016. In March, the actor remembered her on her 5th death anniversary by sharing a childhood picture of him with her.

When Rajkummar Rao was beaten up by 25 college boys and he begged 'Don't hit my face, I want to be an actor'

Hum do Hamare Do released on October 29, on Disney+ Hotstar. Apart from Kriti and Rajkummar, the film also features Paresh Rawal and Ratna Pathak Shah in crucial roles.