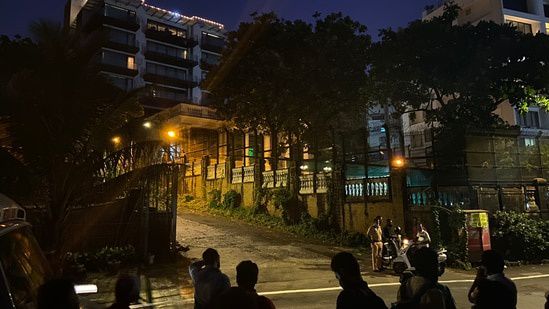 On Friday evening, paparazzi gathered outside Shah Rukh Khan's home, Mannat, saw it get decked up with lights. The decorations appear to be in celebration of his son Aryan Khan's release from jail.

Photos show the top floor of Mannat covered with twinkling fairy lights. The rest of the house was still hidden with thick blinds. Earlier in the day, electricians were also seen putting up the lights on the house. The lights could also be Diwali decorations.

Mumbai's Arthur Road Jail officials on Friday informed that Aryan Khan, who was granted bail in the drugs-on-cruise case, will be released from the jail on Saturday.

"Aryan Khan will not be released from the jail today. He will be released tomorrow morning," jail officials said.

Earlier today, Bombay High Court issued a detailed bail order of Aryan Khan which stated that the accused should appear before Narcotics Control Bureau (NCB) every Friday and was asked to surrender his passport.

Aryan was taken into custody after a raid at an alleged rave party on a Goa-bound cruise took place earlier this month. He was arrested on October 3. He was granted bail on Thursday evening by the Bombay High Court. Aryan's co-accused Arbaaz Merchant and Munmun Dhamecha were also granted bail. "All three pleas are allowed. I will pass detailed orders by tomorrow evening," Justice N W Sambre said on Thursday, as reported by PTI.

While several celebrities have reacted to Aryan's arrest and bail, Shah Rukh and his wife Gauri Khan have not made a comment yet.