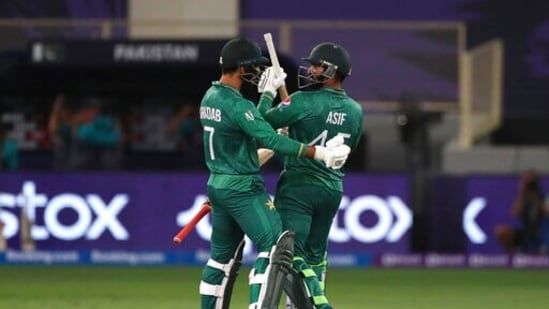 Pakistan registered their third successive victory of the World T20, defeating Afghanistan by five wickets in front of a noisy, spirited and sometimes volatile crowd in a tense Group 2 encounter at the Dubai International stadium here on Friday.

Afghanistan captain Mohammed Nabi took some curious decisions, starting from choosing to bat first despite the threat of dew and every match here having been won chasing. All but one of the powerplay overs were bowled by spin. He bowled out Mujeeb Ur Rahman with four straight overs which Pakistan played out without taking too many risks. Rashid Khan came in to bowl in the 11th over while every other captain in leagues around the world don't delay bringing the ace spinner on in the first available opportunity after the sixth.

Pakistan couldn't rip the match open though, with Babar Azam making a conscious decision to play anchor. While Pakistan decided they had enough power-hitters to take them home, Afghanistan were banking on Khan's 24 balls to win them the game. One of the two ploys was going to be proved wrong. Pakistan's experience prevailed. It wasn't the old pros Mohammed Hafeez and Shoaib Malik but Asif Ali 25*(7) who took them home, showcasing the depth in Pakistan's power-hitting resources by scoring 24 runs from four sixes in the 19th over bowled by the inexperienced Karim Janat.

On paper this was supposed to be an unequal battle. But outside the playing area, the stands were filled with an equal spread of vociferous Pakistani and Afghani fans. By the time the match began, the Afghan supporters had outnumbered the opposing set of fans. Thousands of ticketless people had stormed inside the stands, the videos of which began to surface on social media. At the time of writing the ICC was to issue a statement.

Given the altercation the two set of fans had in their last ICC event encounter in faraway Headingly two years back, tension was palpable and local police on horseback kept vigil.

They were all sitting together, the Afghan fans waving their national flag proudly every time their batters struck a boundary — there were six of them in the powerplay including three sixes. Sitting in the same stands, the cameras had enough Pakistan flags to show every time Shaheen Shah Afridi looked to inflict damage. This time Afridi got only one wicket against his name in the first six but he set another one up in the 12 balls he bowled.

Afridi likes to run in holding the ball in his bowling arm. He does not hide the seam either, like he is telling the batter from the top of his run-up, be warned this is going to be a full in-swinging yorker. His first over to Afghanistan batters didn't fetch him the wickets he got against India, but if moral victory had any place in T20 cricket, he would have scored full marks. Afridi made batting a hard struggle with the new ball. Imad Wasim benefitted in the next over, getting Hazaratullah Zazai to play an ugly hoick and be dismissed without disturbing the scorers. Then Afridi got Mohammed Shahzad, who was attempting some audacious shots, out for 8. Afghanistan kept losing wickets; Harris Rauf clocked a 153 kph ball and snapped one wicket too. But as Afghanistan's boundaries would tell you, they didn't want to hold back. The score was 49/4 at the end of six and the near-capacity crowd, the next most vocal in the tournament after the India-Pakistan game, was treated to turbo charged action.

Afghanistan didn't have enough batting depth and struggled once the field opened up. But the experienced Gulbadin Naib and captain Mohammed Nabi began rebuilding the innings and found a way to deliver the final flourish too against Pakistan's pace, with their 71-run unbeaten seventh wicket stand, 54 of which came in the final five. They would have fancied their chances with 24 needed off the last two but Ali had other plans.