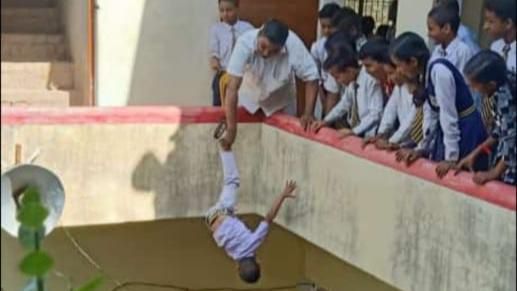 The school principal who allegedly hung a child upside down from the balcony on the first floor of a building has been arrested after photographs of the incident went viral on social media.

The incident took place at Sadbhavna Shikshan Sansthan Junior High School Private School in Ahraura in Uttar Pradesh's Mirzapur on October 28. The principal had meted out the 'punishment' to the Class 2 child for being mischievous.

The child was reportedly pulled up only after he screamed and begged for forgiveness, while the other students looked on. A student who was on the spot at the time said the child was held upside down for ten minutes.

The case was registered on the complaint of the child's father under sections 352 and 506 of the Indian Penal Code and appropriate sections of the Juvenile Justice (Care and Protection of Children) Act.

On being arrested, the school principal said he regrets his actions.

(With inputs from Suresh Kumar Singh)