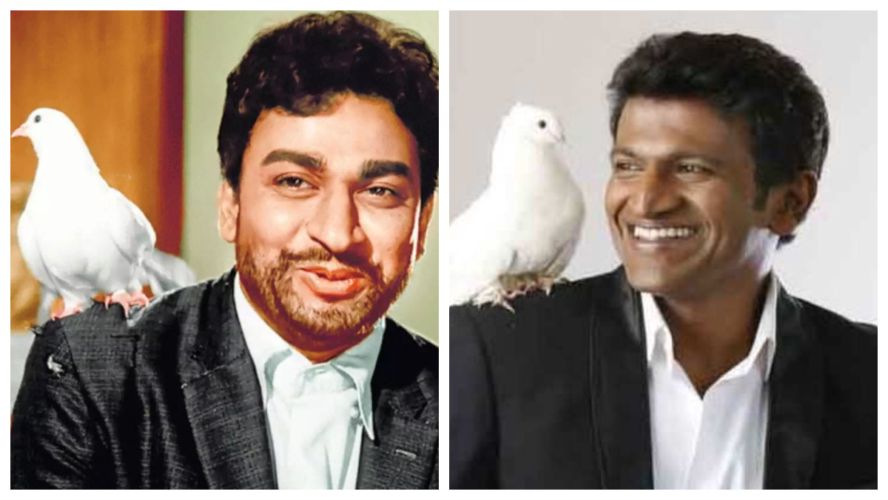 Power Star Puneeth Rajkumar suffered a heart attack and died on October 29 at Vikram hospital in Bengaluru. The actor will be cremated with full state honours.

Puneeth's mortal remains will be kept at Kanteerava Stadium for public homage. The actor's fans have been sharing throwback photos to remember their favourite star, Puneeth Rajkumar. In 2007, Puneeth recreated his father's iconic photo with a pigeon.

Puneeth Rajkumar's fans are heartbroken after hearing the news about the demise of their favourite star. The actor's mortal remains have now been kept at his residence in Bengaluru. His fans and friends have been paying tributes in person and on social media platforms.

In 2017, Puneeth Rajkumar decided to recreate his father Rajkumar's iconic photo with a pigeon in his film Rajkumara. Those who are fans of Dr Rajkumar can never forget his photo with a pigeon. The photo was taken on the sets of Kasturi Nivasa in 1971. This particular photo is one of the most famous pictures in the history of Kannada cinema.

While filming Rajakumara, Puneeth recreated the photo with a white pigeon, just like his father did in his blockbuster film, Kasturi Nivasa.

Rajkumara is written and directed by Santhosh Anandram. The film, which was released in 2017, features Puneeth Rajkumar and Priya Anand in lead roles.

Puneeth Rajkumar was working out at the gym today (October 29) morning when he felt chest pain. He went to a family doctor to get his ECG (Echocardiogram) done. The results showed that his arteries were blocked and he was having a heart attack. He was non-responsive when he was brought to the Vikram hospital. The doctors tried to revive him, but their efforts went in vain.

Puneeth Rajkumar is survived by his wife Ashwini Revanth and two daughters, Drithi and Vandhita.

Puneeth Rajkumar was non-responsive at the time of arrival to emergency: Hospital releases statement