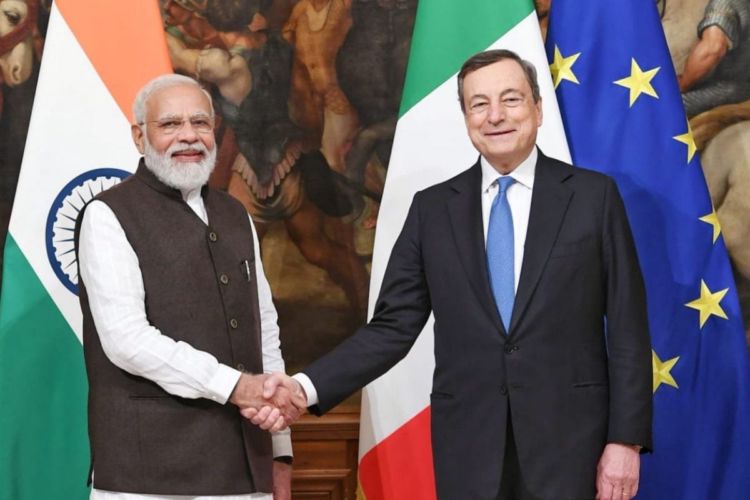 Prime Minister Narendra Modi on Friday met with his Italian counterpart Mario Draghi as part of his official engagements in Rome ahead of the G20 summit. Draghi was seen receiving the PM at the Palazzo Chigi.

After the meeting, the Ministry of External Affairs said in a tweet, 'Synergising the India-Italy Partnership!'

'PM @narendramodi was received by the Italian PM Mario Draghi, as he arrived at Palazzo Chigi for their first in-person meeting. Both leaders inspected the guard of honour before proceeding for delegation level talks,' the MEA said in a tweet.

PM @narendramodi was received by the Italian PM Mario Draghi, as he arrived at Palazzo Chigi for their first in-person meeting.

Both leaders inspected the guard of honour before proceeding for delegation level talks. pic.twitter.com/3s5HqWW0VX

Modi also held wide-ranging talks with the top leaders of the European Union here during which the two sides discussed deepening the India-EU friendship, particularly in areas such as trade, commerce, culture and the environment.

The PM was on Friday greeted by a jubilant and cheering Indian diaspora, who recited hymns and chanted his name to welcome him on his visit to Italy. In a video shared on social media, Prime Minister Modi was seen in a happy mood, walking along a park cloaked with heavy security, greeting and shaking hands with the members of the Indian diaspora.

Before meeting the Indian community, Modi paid floral tributes at the bust of Mahatma Gandhi at Piazza Gandhi. The community members, holding Indian flags, were seen chanting Modi's name cheerfully, with the Indian leader reciprocating by waving to the crowd.

With folded hands and full attention, Prime Minister Modi listened to the recital of hymns by a group of members, who also offered a bunch of books to him. Modi also joined them in reciting 'Om Namah Shivay' at the end. He praised their effort and also exchanged a few words with them.