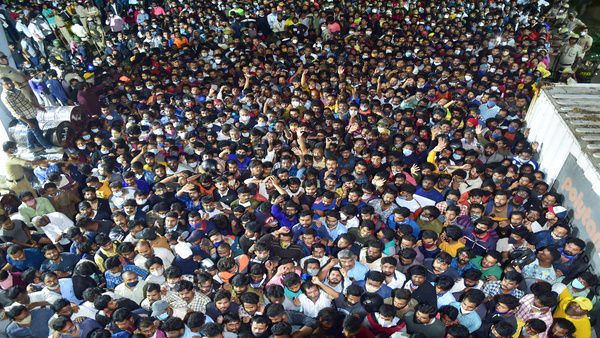 Reportedly, the Bengaluru police is finding it hard to maintain the decorum.

The untimely demise of Puneeth has shocked entertainment industry, colleagues, friends, family and fans. His mortal remains will be put to rest beside the grave of his father, the legendary actor of Kannada cinema Dr. Rajkumar in Bengaluru.

Restless crowds of stunned fans milled around the hospital complex as news came in of the sudden death of the actor, the son of much loved matinee idol Rajkumar who fast outgrew his father's shadow to carve a place all his own in the Kannada showbiz industry.

According to the reports, the last rite will be performed on Sunday, as the family awaits the arrival of Puneeth's daughter, who is staying abroad.

Condolences at the death of the actor, who began his career as a child artist appearing in movies such as "Thayige Thakka Maga" and "Bhagyavantha", poured in from political leaders, including Prime Minister Narendra Modi, colleagues in the southern film industry as well as those in Bollywood -- their messages echoing his legions of fans grieving the hero who had gone too soon.

Sharing a picture with the actor and his family, the prime minister said, "A cruel twist of fate has snatched away from us a prolific and talented actor, Puneeth Rajkumar. This was no age to go. The coming generations will remember him fondly for his works and wonderful personality. Condolences to his family and admirers. Om Shanti."

Karnataka Chief Minister Basavaraj Bommai was among the first to condole the death. "A huge personal loss and one that's difficult to come to terms with. Praying the almighty gives the Rajkumar family and fans the strength to bear this loss." he tweeted," the chief minister said.

After a stint as a child actor, Puneeth made his debut as a leading man in the 2002 movie "Appu" and followed it up with a string of successful movies, including "Abhi", "Maurya", "Ajay" and "Arasu".

People News Time
Disclaimer: This story is auto-aggregated by a computer program and has not been created or edited by People News Time. Publisher: OneIndia